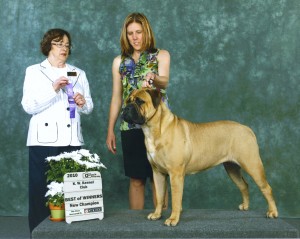 AM Grand/Can Champion Athena Mildred CGC also known as “Titi” is the second youngest member of our Bullmastiff crew. She is our female pick of the litter between Stonehill’s Ursa Mae and Am/Can Champion Harlett’s High Stakes, CGN (Dealer) whelped April 2009. Athena can often be seen walking around the house with one of her “dolls” hanging out the side of her mouth. She always is watching and learning what everyone else is doing. Athena stands at 25 inches at the withers and weighs 108 lbs. She is a very well proportioned fawn bitch. Like her brother Otus, she has a broad muzzle, slightly undershot bite and nice wrinkling on her head. From a young age, Athena has enjoyed showing in the ring. She finished her Canadian Championship at 13 months, AKC shortly after and her AKC Grand in the spring of 2014.